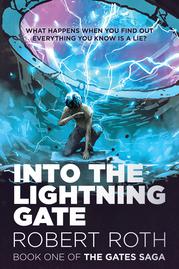 INTO THE LIGHTNING GATE

A 20-something San Franciscan finds himself at the heart of cosmic drama in Roth’s SF series starter.

As the story opens, Cameron Maddock, a 26-year-old tech consultant, is talking with his ultrasophisticated, custom-designed artificial intelligence, Ego, about his day’s schedule. Most of the day will be devoted to a quick job that involves bluffing his way into the headquarters of the biotech company Bridgespan and hacking into the heart of their information network as a test of the company’s security. Cam, who’s always had “a mind for problem-solving,” is gifted at this kind of high-tech work—much to the chagrin of Bridgespan’s CTO, who hired him, and the company’s head of network security. After celebrating his successful job with his best friend, Tony Zhang, Cam proceeds the next day to his private workshop only to be alerted by Ego to the presence of two armed intruders back at his apartment—and their enigmatic “Boss,” a man named Tomás Aguilar, who seems unnervingly aware of Cam’s every move and is after him for unknown reasons. Even after Cam displays some unexpected combat skills—suddenly, he’s like “a video game character come to life”—the Boss is indefatigable in his pursuit, and Cam is soon propelled into a chase adventure that brings him in contact with a broader world than he’d ever imagined—one that involves alternate dimensions and the Gates between them. Over the course of this novel, Roth takes readers through all of this at a brisk pace and with a sense of momentum that keeps the pages turning. There are occasional rhetorical oddities along the way that can be a bit distracting; for example, the narration inconsistently refers to singular characters by plural pronouns, which can be particularly confusing in group action sequences. But the story presents a steady barrage of revelations that upend Cam’s life with a skill and a jumpy sense of humor that make the protagonist a fun character to root for. Readers will welcome the possibility of going on future adventures with him.

An intriguing, well-constructed thriller about a tech whiz on a journey of discovery.