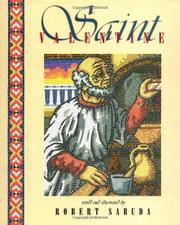 The most interesting feature of this retelling of a story about a saint martyred in A.D. 270 is the art, a meticulous re- creation of the medium of its subject's period. Using thousands of tiny, rectangular pieces resembling tiles, Sabuda replicates the effect of Roman mosaics. His simple designs and harmonious, gently muted colors are pleasing, and he achieves surprising subtleties of expression, considering the intractability of the medium. Actually, the illustrations work even better from a slight distance (as with a group), so that the demarcations between the tiny pieces are less predominant. The technique, which tends to congeal the action, makes relatively undramatic illustrations; still, it's a fascinating experiment that brings the ancient world to life by paying tribute to its art rather than by picturing it in a modern style. The straightforward narrative centers on Valentine as a physician whose ointment restores the sight of a jailer's blind daughter, long the saint's friend. It's implied that the long-awaited cure takes place at the moment of his offstage death; the story ends with the joy of the child's renewed vision. An unusual and attractive rendition. Historical note. (Nonfiction/Picture book. 6-9)