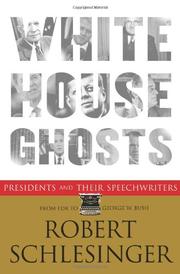 Presidents and Their Speechwriters

Schlesinger (Political Journalism/Boston Univ.) confidently assesses the diverse contributions made by speechwriters toiling thanklessly on behalf of presidents from FDR to G.W. Bush.

With the advent of radio, Warren Harding became the first president to have a full-time speechwriter, although even George Washington asked someone else (James Madison) to help draft his farewell address. Schlesinger attributes the modern style of presidential communication to FDR, whose memorable slogans were variously coined by the speechwriting trio of Samuel Rosenman, Raymond Moley and Louis Howe, with Roosevelt weaving together their ideas. The author looks at each presidential style in turn. Truman, who delivered speeches awkwardly, used lawyers, economists and public-administration men such as Clark Clifford and George Elsey as his writers. Eisenhower, a stickler for good grammar, liked the “straightforward, meat-and-potatoes style” crafted by Bryce Harlow. Eisenhower’s team hired the first black speechwriter, Frederic Morrow, and coined the term “military-industrial complex” for his farewell speech. Ted Sorensen used short words with simplicity and clarity in his speeches for JFK, though his boss took the credit and often ad-libbed. (The author’s father, Arthur Schlesinger Jr., plays a strong supporting role in this chapter as a Kennedy aide and speechwriter.) Bill Moyers and Richard Goodwin merged the roles of writer and policymaker during their time with LBJ, forging a preferred style somewhere between eloquent and forceful. Nixon was an exacting writer and editor, never satisfied with the drafts he was given by Ray Price or William Safire. Ford allowed his top advisers to squabble over his speeches. Carter disastrously tried to write all his own, while Peggy Noonan famously helped establish Reagan as “the Great Communicator.” The first Bush eliminated personal detail from his speeches because he tended to choke up; Clinton was a master at ad-libbing. The “troika” of Michael Gerson, John McConnell and Matthew Scully gave Bush II “an axis of evil” to fulminate against. Schlesinger lingers over particular speeches good and bad, thereby offering a revealing look at the making of history.