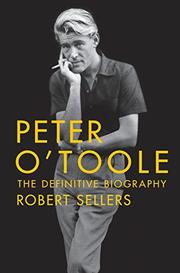 Contemporary audiences may best know O’Toole from his luminous portrayal of T.E. Lawrence in David Lean’s 1962 epic Lawrence of Arabia, but he had a varied career that spanned several decades, earning him significant critical notice through the years and an impressive eight Academy Award nominations. O’Toole rode the crest of his stardom in the 1960s, when, fresh from his star-making turn as Lawrence, he was busily sought after for numerous leading film roles. Yet his increasing alcohol consumption and a habitually chaos-driven personal life frequently intersected with his professional pursuits and gradually began to undermine his career. Sellers (What Fresh Lunacy Is This?: The Authorised Biography of Oliver Reed, 2013, etc.) provides a well-researched and colorful overview of O’Toole’s background, from his earliest theatrical performances through the many films and stage productions of later years. The author also focuses a lot of attention on the destructive side of his subject’s personality, diligently tracking every extended pub crawl and public disturbance he caused. O’Toole’s high jinks were often in the company of other notable talents of his generation, several of whom have become inebriated legends in their own rights, including actors Richard Burton and Richard Harris, who, together with O’Toole and Oliver Reed, were the subject of an earlier Sellers biography, Hellraisers (2009). Chronicling the latter portion of O’Toole’s career, with his stardom diminished and a few life-threatening episodes forcing him to abstain, at least somewhat, from drinking, the author gradually shifts his focus to O’Toole’s craft as an actor and his particular skills for building his performances. This approach leads to greater insight into his personality and provides more depth to the narrative.

This engrossing biography of an often excruciatingly difficult though uniquely gifted actor should encourage readers to seek out some of O’Toole’s many memorable film performances.