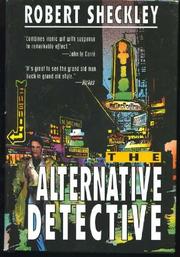 Hobart Draconian runs the Alternative Detective Agency out of Snuff's Landing, New Jersey, where he lives with his latest wife Mylar and her unfulfilled lover Sheldon, the IRS agent who's auditing Hob's books. If this sounds like Thomas Pynchon, wait till you hear about the case. First, Hob's cousin, sailboard builder Frankie Falcone, wants him to trace five sailboards that a company in Ibiza, Spain, never paid for; then, next day, foxy Damascene (nÇe Rachel Starr) hires him to jet with her to Paris to find her lover Alex Sinclair, Hob's old housemate from his own days in Ibiza (``like you attached Coney Island to Bug Sur and put the whole thing under Mexican rule''). The two cases are connected, of course, but you can't expect to figure out how when you're running around Paris with the likes of Tony Romagna, the shadow (maybe a cop) who's full of restaurant tips; or Arne, the helpful Danish mime; or Etiänne, the abductor who surrenders his gun to a cabbie's dog and then forgets the address he's supposed to take Hob to; or Gerard Clovis, the film director who hired Alex as an actor and then wants to hire Hob. Funky sf-fantasist Sheckley hasn't published a mystery novel (cf. The Game of X, 1965) for 20 years. It's great to see the grand old man back in grand old style.