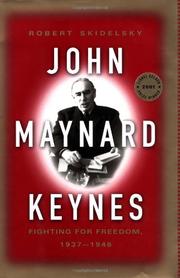 Final volume in the definitive biography (following The Economist as Savior, 1920–1937, 1994, etc.) of the brilliant British economist.

Keynes (1883–1946) may or may not have been the greatest economist of the last century, but he was certainly the most influential. Moving easily in academic, literary, business, and political circles, he was merely an unpaid advisor to the Treasury (albeit with his own office) during the 1930s and ’40s, yet no British politician could ignore him. Rejecting Marxism and socialism, he also dismissed much of classical economics. Many of his ideas outraged traditional economists. He taught that efforts at a balanced budget made no sense. He advocated generous government spending during slumps but frugality in boom times. Skidelsky (Political Economy/Warwick Univ.) begins the present volume with Keynes at the peak of his influence in 1937. This was partly due to the power of his ideas but also because he advocated programs politicians were eager to follow for other reasons (it was, after all, the Depression). Almost immediately he was caught up in the preparations and financing of WWII. Keynes’s advice ensured that Britain’s enormous war budget did not produce the damaging inflation that occurred during WWI. In addition, he advocated a postwar monetary system that avoided the chaotic currency swings that stifled trade and aggravated economic cycles between the wars. Negotiating with the US, he was forced to compromise, but the successful Bretton Woods agreement contained many of his ideas. His greatest failure was America’s 1945 refusal of a massive grant to revive England’s crippled economy. Readers accustomed to the History Channel view of the two allies as blood brothers will be surprised to learn how aggressively US leaders strove to eliminate Britain’s empire and economic influence.

It’s no easy task to write a readable history of the WWII years leaving out all battles and concentrating on how the bill was paid, but Skidelsky succeeds superbly.