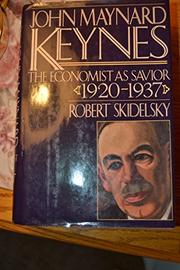 The second installment of Skidelsky's three-volume biography of the 20th century's most influential and controversial economist. As in the superb first volume (1986)—which took Keynes (1883-1946) through the immediate aftermath of WW I—Skidelsky (International Studies/University of Warwick) offers a perceptive portrait, one that here reveals a worldly-wise philosopher at the peak of his considerable powers. Focusing on Keynes the innovative, albeit pragmatic, thinker who abandoned any notion that classical economics was a body of knowledge rather than a method of analysis, the author provides accessible perspectives on how the economist involved himself in Whitehall's disastrous decision to return England to the gold standard in 1925; in the mass misery of the Depression; and in other great issues. Stressing his subject's constant efforts to devise an economic system that would tame capitalism's more savage features without unleashing socialism, Skidelsky shows how Keynes achieved international stature sufficient to affect FDR's New Deal and then went on to write a masterwork with remarkable staying power, The General Theory of Employment, Interest, and Money. In tracing the metamorphosis of Keynes from clever young man to authoritative adult, moreover, the author doesn't scant the public man's private life. Among other insights, he provides a moving account of how Keynes, long a homosexual, astounded Bloomsbury friends by falling in love with and marrying Lydia Lopokova, a Russian ballerina. Covered as well are the ways in which Keynes (who moved easily among venues as varied as academe, the arts, finance, government, and high society) used his market savvy to make himself a wealthy man. (One cavil: Skidelsky devotes too much attention to trivial details—e.g., furniture purchases for the Keynes country home and the given names of a servant's children.) A comprehensive and commanding profile that's bidding fair to become the standard reference. (Sixteen pages of b&w illustrations)