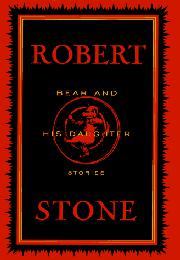 BEAR AND HIS DAUGHTER

A vibrant first collection from the award-winning author of, most recently, Outerbridge Reach (1992) and other thoughtful and powerful novels. The landscapes of drug addiction and war and its aftermath are depicted with rueful wit and furious intensity in these seven strongly imagined tales, written between 1969 and the present. Even in "Miserere," whose narrative premise (an embittered widow insists that aborted fetuses receive the church's blessing) strains credulity, Stone hooks us with sharp, convincing characterizations. His stories, like his novels, pulse with barely restrained tension: You feel his characters are about to explode. "Aquarius Obscured," an abrasively funny early piece, subjects its strung-out heroine to the "fascist" fulminations of a talking dolphin. Two other stories reveal the violent transformative consequences of drug-running operations, combining Hemingway-like vigor with Kafkaesque despair. The title novella, which traces the downward progression of an alcoholic poet reunited with the grown daughter who blames her own drinking and emotional problems on their longtime troubled relationship, moves with remarkable and implacable swiftness to a devastating climax; it's a compact Greek tragedy set in the Nevada mountains. "Helping" and "Absence of Mercy" trace with harrowing precision the sufferings of men shaped and trapped by the centrality of violence in their earlier lives, as it comes back to haunt them. Stone writes two kinds of scenes better than any other American novelist: summary descriptions of the whole shape and thrust of his characters' lives, and disturbingly visceral accounts of confrontations between his protagonists and their various demons. There are many such scenes here. For dramatic immediacy and emotional power, Stone has few contemporary peers, and no superiors: altogether, an impressive debut collection that will further whet appetites eager for his next novel, expected later this year.