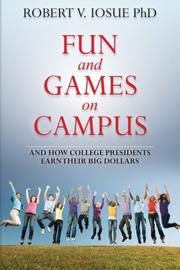 Iosue describes the comedic travails of college presidents—fundraising attempts with eccentric elderly millionaires, events with temperamental musicians and speakers, and everyday debacles with drunken frat boys. The author’s persona is that of an old-school curmudgeon with Calvinist tendencies and an Ozzie and Harriet manner. He opposes coed cohabitation, pets on campus and all manner of freewheeling student behavior. Organized by types of interactions—“A Typical Day” and “Fraternity Frolics” are two chapter titles—the book chronicles Iosue’s struggle not to lose his mind or his temper amid life on campus. Most winningly, the author isn’t afraid to mock his own character flaws, devoting many details to the large egos of college presidents. He even shares his failed attempts to get Frank Sinatra to appear on campus. His first-person narrative of his misadventures is told in a droll, polished style. However, Iosue’s evident conservative bent may irk some readers. While most will laugh at his descriptions of drunken fraternity antics, his jabs at Transgender Studies and mentions of the Anita Hill–Clarence Thomas case may alienate some of his audience. In particular, the chapter on sexual harassment—where Iosue largely throws up his hands at the university’s inability to determine guilt or innocence and comments on harassment of students he considers “schlumpy”—is an unfortunate subject choice that will leave some readers fuming. At minimum, it undermines Iosue’s authority and sympathy as a narrator. It is one thing for a college president to joke about keg parties on campus, but another to approach sexual harassment in a flippant or jocular way.

A sometimes pleasant adventure that loses its credibility when it ventures into the darker side of on-campus life.