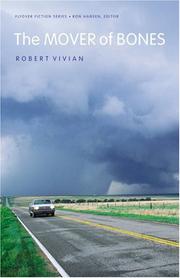 THE MOVER OF BONES

Pitiless, weird story of the travels of a dead girl’s bones, from the author of Cold Snap as Yearning (2001).

The plot here is beyond strange: A janitor in Nebraska digs up the bones of a young girl who was tortured, murdered and abandoned. The excavation of her bones seems to resurrect something of the girl’s innocence; merely touching them gives the lonely, alcoholic janitor a sense of purpose, and he drives the bones around Nebraska, bringing them to various people in some random, unexplained ritual. Sometimes the janitor invites someone to come close, to look at the mysterious bundle he carries with him, but those who need her most seem to find her. Something in the girl’s brief life makes people see what is undone in their own. She shows them what they have missed, what they have valued and lost; her bones, like those of a saint, seem to sanctify the people who see them. If all that isn’t bizarre enough, consider the story’s form. Few characters appear in more than one chapter—even the janitor shows up only at the margins of later stories. The text is composed of 18 first-person narratives—some are short wails punctuated by overwhelming grief and pain, some are longer and more muted reviews of unfulfilled hopes. Battered women, late-blooming poets, drug-addicted shopkeepers, among others, fall under the bones’ spell. As the characters are hypnotized by the murdered girl, so too do their voices mesmerize the reader. Vivian’s ability to fully inhabit his characters, to render their voices, their thoughts, their quirks and fears, is flawless. Indeed, the emotional intensity and unrelenting revelations of the interior life of its most banal people are exhausting. This is a Nebraska that would send Poe running for his life.

Like the dead girl at its center, this tale is disturbing, horrifying and beautiful all at once.