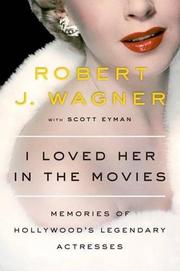 I LOVED HER IN THE MOVIES

by Robert Wagner with Scott Eyman

Wagner (You Must Remember This: Life and Style in Hollywood’s Golden Age, 2014, etc.), now 86, returns with another installment of his life in the movies, this time focusing on the Hollywood ladies, many of whom he knew quite well thanks to a long career. If he didn’t work with them, he knew them socially or personally. His knowledge of Hollywood film history is prodigious. Don’t expect any bad-mouthing or dirt; “this is a book about character and craft, talent and genius, respect and love.” Mostly. Wagner admits to having a “brief, ships-in-the-night fling” with Joan Crawford, who had an “infectious personality and a huge drive.” Actresses, writes the author, “have it harder” than actors, and they also have shorter careers—“for every Meryl Streep there are ten Demi Moores and Meg Ryans, women who earned major salaries and major parts for precisely as long as they were the Hot Young Girl.” The actress cavalcade breezes by chronologically. Wagner starts in the 1930s and ends in the ’80s, with short chapters on two wives: Natalie Wood (“complicated”) and Jill St. John (a “good actress”). The author is succinct and pithy at giving a sense/opinion of who they were as people and what their strengths were as actresses. Gloria Swanson was “incisive,” “industrious” and “imperious.” Neither Jean Harlow nor Mae West was “particularly beautiful,” but both “made sex safe for the middle class.” Although Bette Davis was a “small woman,” she came into the “movie frame with a rush.” Marilyn Monroe was a “sweet, nervous girl” who became a “legend.” Some readers might find Wagner sexist and old-fashioned. Looks matter to him. Harlow had a “spectacular body” she liked to display; Jean Peters was “breathtaking;” Lana Turner had a “body that men would go to war over;” Brigitte Bardot was the “hottest thing on two legs.”