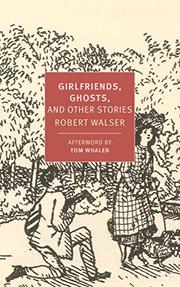 GIRLFRIENDS, GHOSTS, AND OTHER STORIES

The title suggests a miscellany, which this collection of 88 short pieces certainly delivers.

These sketches, essays, parables, prose poems, newspaper pieces, maybe even diary entries by the enigmatic Swiss author (A Schoolboy’s Diary, 2013, etc.) were written during the first third of the 20th century, right up to the point when the previously prolific writer was hospitalized for anxiety and depression in 1933. He was 55 at the time, and he never published again, though he lived another two decades. Many of these pieces consist of a single, dense paragraph, and few run much longer than a page. Recurring motifs concern a man (characters rarely have names) who encounters an attractive woman in a pastoral setting, a man who feels similarly attracted and seduced by a personification of nature (in “The Goddess,” the title character is a cloud in a sunny sky), a man who ponders his own process of writing or that of others. In “Walser on Walser,” he opens, “Here you can hear Walser the writer speaking” and asks, “Is it perhaps asleep in me, my passion for writing?” Many of the pieces open with commentary on the piece the reader is about to read or close with reference to the piece the reader is finishing. Some of them are character studies that suggest just how hard it is for anyone to know anyone, including oneself. The earliest pieces are the most conventionally storylike, with hints of plot. In “She Writes,” a woman who served as an artist’s model begins her letter, “Hey, old monster” and addresses him as his supplicant, critic, and accuser, haranguing him for money after she feels he has done her ill. “You pretend it’s me you painted in this picture? No, swine, that’s neither I nor any girl who exists; rather it merely bears a few rough similarities to womanhood.” Considered by contemporaries to be an inspiration for Kafka and a kindred spirit, Walser is generally lighter and more playful and very attuned to detail. “We need only open our eyes and look around carefully to see valuable things,” he writes, “if we look at them closely enough and with a certain degree of attention.”

Whatever their ostensible subjects, most of these pieces are about looking closely and paying attention.