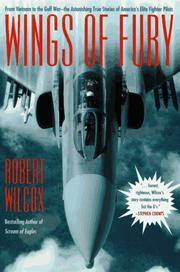 A behind-the-scenes history of American fighter pilots, from Vietnam to Desert Storm. Wilcox, a former air force information officer, believes that Vietnam was the forge that shaped the great air victory in the Gulf War. Profiting from the mistakes of Vietnam (due, in part, to the ineffective training of pilots in the 1960s), many veterans of that conflict became highly critical and innovative teachers. They challenged their young students to the utmost in long, brutal sessions of combat-simulated training; they developed new techniques of aerial warfare; they stressed a new level of professionalism in the service—and in the process they developed undoubtedly the best fighter pilots in the world. Wilcox interviewed many of the highest achievers, past and present, including the navy's ``Top Guns'' (he warns that the reality of being a Top Gun is far different from the image presented in the melodramatic movie of that name). To be successful, Wilcox asserts, a fighter pilot must learn to control fear, to live with it and fly with it, knowing that no margin of error is allowed in combat. The pilots he interviews are cool and self-assured, proud of being able to keep their emotions in check, loyal to each other, somewhat isolated from the outer world. They find unwinding difficult. They are, he says, a highly macho group: They face the possibility of sudden death every time they fly, and their ethos stresses courage, dedication, and performance above everything. Such dedication exacts a price: disrupted family lives, divorces, and a cramped lifestyle (military pilots earn far less than their commercial counterparts). A revealing study of the lives of an isolated, elite American warrior class. The book often reads like an oral history, and that is both a strength and a drawback: The narrative is frank and lively, but it lacks the objectivity and research notes one expects in a serious work of history. (8 pages b&w photos, not seen)