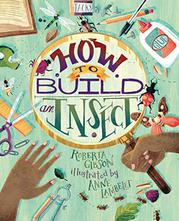 HOW TO BUILD AN INSECT

While ostensibly giving instructions on creating a 3-D insect replica, art and text teach the rudiments of entomology.

The initial double-page spread shows a dark room cluttered with cleaning supplies, a small drafting table, and scientific paraphernalia including a full-length human skeleton. An opening door at the left sheds light on the room’s contents while also revealing the brown-skinned arm and leg of someone entering, carrying a large jar whose contents will be revealed at the next page turn. The first words, in bold, white, playful type: “Let’s build an insect. Where should we start?” The next double-page spread answers the question by mentioning that humans have heads, so “Let’s give our insect a head.” Spread by spread, questions are asked and then answered by the invisible narrator, as the pair of hands that carried the jar into the room follows directions and uses art supplies to create a colorful, attractive creature. Attention-grabbing, clever art accompanies the whimsical text as it lightly compares insect anatomy with that of humans and other animals, notes basic body parts and some differences among insects, and explains vocabulary such as ocelli and mandibles. Especially droll: music entering a cricket’s “knee ears” and an insect gasping because it needs holes in its exoskeleton rather than lungs. The conversational narration ends with a bit of a thud, though, given its lively tone throughout. Older readers will appreciate a final spread that gives further information in a straightforward manner.