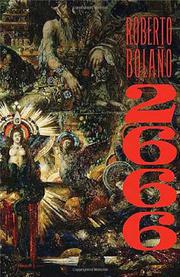 Life and art, death and transfiguration reverberate with protean intensity in the late (1953–2003) Chilean author’s final work: a mystery and quest novel of unparalleled richness.

Published posthumously in a single volume, despite its author’s instruction that it appear as five distinct novels, it’s a symphonic envisioning of moral and societal collapse, which begins with a mordantly amusing account (“The Part About the Critics”) of the efforts of four literary scholars to discover the obscured personal history and unknown present whereabouts of German novelist Benno von Archimboldi, an itinerant recluse rumored to be a likely Nobel laureate. Their searches lead them to northern Mexico, in a desert area notorious for the unsolved murders of hundreds of Mexican women presumably seeking freedom by crossing the U.S. border. In the novel’s second book, a Spanish academic (Amalfitano) now living in Mexico fears a similar fate threatens his beautiful daughter Rosa. It’s followed by the story of a black American journalist whom Rosa encounters, in a subplot only imperfectly related to the main narrative. Then, in “The Part About the Crimes,” the stories of the murdered women and various people in their lives (which echo much of the content of Bolaño’s other late mega-novel The Savage Detectives) lead to a police investigation that gradually focuses on the fugitive Archimboldi. Finally, “The Part About Archimboldi” introduces the figure of Hans Reiter, an artistically inclined young German growing up in Hitler’s shadow, living what amounts to an allegorical representation of German culture in extremis, and experiencing transformations that will send him halfway around the world; bring him literary success, consuming love and intolerable loss; and culminate in a destiny best understood by Reiter’s weary, similarly bereaved and burdened sister Lotte: “He’s stopped existing.” Bolaño’s gripping, increasingly astonishing fiction echoes the world-encompassing masterpieces of Stendhal, Mann, Grass, Pynchon and García Márquez, in a consummate display of literary virtuosity powered by an emotional thrust that can rip your heart out.

Unquestionably the finest novel of the present century—and we may be saying the same thing 92 years from now.