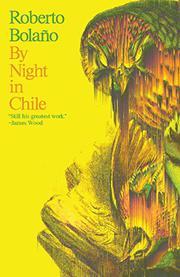 BY NIGHT IN CHILE

Moral weakness and political collusion are the subtly developed themes of this terse 2000 novel, a first US publication for the late, great Chilean author (1953–2003).

It consists of a nightlong deathbed monologue, presented in a single run-on paragraph, as spoken by Sebastién Urrutia Lacroix, a Chilean Jesuit priest also well known as a poet and literary critic. Father Lacroix’s hurtling memories begin with a lengthy account of his weekend visit, as a young seminarian, to the estate of eminent (and probably homosexual) critic Gonzalez Lamarca, a.k.a. “Farewell”—where the hopeful cleric is privileged to glimpse native poet Pablo Neruda “reciting verses to the moon,” and even converse with the great man. Subsequent memories describe Lacroix’s acquaintance with novelist-diplomat Don Salvador Reyes, himself a friend of German novelist (and WWII Wehrmacht officer) Ernst Juenger, Lacroix’s history of publications and of travels under the auspices of the Catholic charitable works program Opus Dei—all shadowed by an unidentified “wizened youth” who seems to be the priest’s sworn adversary and nemesis. We then learn of Lacroix’s employment by sinister entrepreneurs Raef and Etah (whose surnames, reversed, spell “Fear” and “Hate”)—first to “write a report on the preservation of [European] churches,” then to instruct revolutionary General Augusto Pinochet and members of his junta in the principles of Marxism (a stunningly detailed sequence). Finally, Lacroix recalls soirées at the lavish home of novelist-socialite Maria Canales, whose American husband lends his basement for the imprisonment and torture of “subversives.” This unusual fiction builds a devastating indictment of aesthetic withdrawal from moral responsibility out of Lacroix’s increasingly despairing reminiscences, which deftly incorporate references to the biblical Judas Tree (where Christ’s betrayer hanged himself) and the quisling-like poet-“patriot” Sordello, a victim of Dante’s Inferno. And, in the chilling conclusion, we learn the identity of the “wizened youth.”

One of the great Latin American novels, in an exemplary translation. Not to be missed.