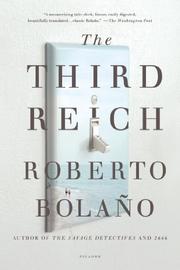 From the acclaimed Chilean novelist (1953–2003), a recently discovered 1989 novel; this enigmatic look at power though the prism of war games is on a smaller scale than the two sprawling works that secured his reputation: The Savage Detectives (2007) and 2666 (2008).

Udo Berger and his girlfriend Ingeborg, Germans in their 20s, arrive on Spain’s Costa Brava for their vacation. Life’s never been better, Udo confides in one of the diary entries that comprise the novel. War games are Udo’s passion, and he’s the German champion, a brilliant strategist moving armies across the board; he’s brought with him a World War II game, the eponymous Third Reich. (Udo’s no Nazi, despite his nostalgic love for German generals.) He and Ingeborg make friends with another German couple, Charly and Hanna; they go drinking and clubbing together. Charly is an aggressive boor who drowns while windsurfing, and a puzzling distraction from the core of the novel: the game and two unlikely opponents. Hanna and Ingeborg return to Germany; Udo has other fish to fry. He remains behind ostensibly to identify Charly’s body when it washes up (it does). But he also wants to romance the attractive hotel owner, and more importantly pursue his obsession with a mysterious, badly scarred guy known as El Quemado (the Burn Victim), who owns a pedal-boat business and sleeps on the beach. No one is sure of his background; South America? There’s even a suggestion he’s the re-incarnation of an Incan warrior. At first Udo idealizes him as a Noble Savage, but he’s plenty smart, a poetry lover. Udo teaches him the game; El Quemado catches on fast. Power shifts from the cocksure Udo to his humble opponent as the German crumbles, on the board and off. It’s an allegory, yes, but Bolaño casts around uncertainly for the best way to frame it, and juggles various endings.

A sluggish novel that gives few indications of the extraordinary work to come.