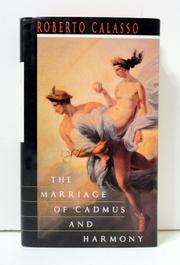 THE MARRIAGE OF CADMUS AND HARMONY

A stunning journey back to ancient Greece with Italian author Calasso, who, in a first US publication, takes apart the old myths to discover the birth of history and modern thinking amid timeless patterns of behavior. Ranging as widely as one of the peripatetic Olympian gods he describes, Calasso moves effortlessly between the legends and the poets and writers—like Homer, Ovid, and Sophocles—who gave their own spin to the old stories. He begins with the rape of Europa, and ends with the marriage of Cadmus to Harmony. The first story reveals the Olympians under Zeus, already withdrawing from the world, manifesting themselves only in forcible interventions like rape; the last marks the final occasion when the gods and men had ``been on familiar terms; after that remote time, to invite the gods to one's house became the most dangerous thing one could do, a sign of the now irretrievable malaise between heaven and earth.'' As Calasso recounts the classic stories in between these two events, he not only divides the relationship between man and the gods into three stages—the third being the modern one of mutual indifference—but also gives accessible lessons on ancient history, religion, and philosophy. Central to the narrative is the death of Odysseus, which ends the ``long chain of stories that predate history. After Odysseus, our life without heroes begins; stories are no longer exemplary but are repeated and recounted. What happens is mere history.'' Action, the hurly-burly of man encountering gods in extraordinary ways and stranger places, is ended with Cadmus' gift of the alphabet to the Greeks. Henceforth, religion—the gods—``will be experienced in the silence of the mind, no longer in the full and normal presence.'' But the meanings of the myths linger on—a myth, Calasso asserts, ``is the precedent behind every action, its invisible, ever-present lining.'' Here, the past not only comes vibrantly alive but connects to the present in a virtuoso display of scholarship and insight. A remarkable feat.