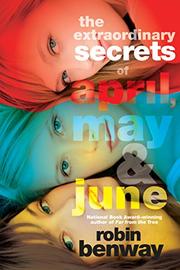 THE EXTRAORDINARY SECRETS OF APRIL, MAY & JUNE

Emotionally bruised by their parents’ divorce, three California sisters move from Orange County to the Valley with their mother. In chapters narrated alternately by each sister, the girls discover and exercise their magical gifts while coming to terms with the family breakup. Risk-averse April, a high-school junior, sees the future; sophomore-rebel May can disappear; status-hungry freshman June reads minds. April’s visions of impending catastrophe and the girls’ efforts to prevent it drive the plot, but the breezy, chick-lit tone works against depth, and too much tiresome sibling bickering slows the pace. The gifts’ provenance and purpose are unclear; the rules governing them shift. May’s tendency to disappear inadvertently when stressed is supposed to tell readers something about her, but because she disappears volitionally whenever the plot requires it, that message is lost. Lurking in this half-baked paranormal romance are ingredients for a first-rate fantasy with engaging characters. Weak plot infrastructure and slapdash execution prevent them from coalescing into a satisfying whole. Mature elements include teen drinking, drug use, impaired driving and casual sex. (Paranormal romance. 14 & up)