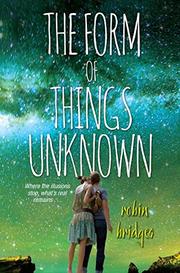 THE FORM OF THINGS UNKNOWN

Natalie hopes a summer Shakespeare program will offer stability, but instead, her belief in rumors of a theater ghost suggests her schizophrenic delusions may be worsening.

A recent delusional episode resulted in the white teen’s diagnosis of schizophrenia, from which her grandmother also suffers. Initially, Natalie is determined to use medication and other treatment techniques to avoid future schizophrenic episodes. But she also longs to be a carefree teen, prompting her concealment of her diagnosis from her new (apparently mostly white) theater friends—resulting in alcohol consumption and missed medication doses. Consequently, Natalie’s increasingly fearful reactions to rumors of a theater ghost seem plausibly related to her mental health diagnosis. Readers will struggle with Natalie as she evaluates her own mental stability, especially as her grandmother’s intensifying delusions add terror to the schizophrenia diagnosis. Unfortunately, a less interesting storyline involving a dull romance with Lucas, the handsome white boy Natalie recognizes from the mental health treatment facility, soon takes center stage. Her declarations of falling in love seem unfounded and premature. A potentially interesting reveal gets lost in several other characters’ abruptly shifting attitudes and behaviors—especially the grandmother’s sudden delivery of sage advice about the power of love. That this Savannah, Georgia–set tale seems to have no significant African-American characters is a real shame.