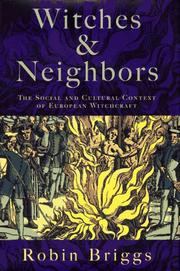 The Social and Cultural Context of European Witchcraft

An impressively researched cross-cultural exploration of a disturbing phenomenon in European history. Religion scholar Briggs (Oxford Univ.), concentrating on the period from the 14th to the 17th centuries, offers a thought-provoking analysis that disabuses the reader of some commonly held stereotypes about witchcraft. The most startling fact is that not all of the accused were women. Men accounted for approximately 25 percent of accused witches in early modern Europe, though in France men composed half (and in Iceland 90 percent) of those on trial. Indeed, it is the pan-Europeanism of this book that is so novel and refreshing. Rather than merely trotting out the same hackneyed examples from Britain, France, and Germany, Briggs highlights the regional diversity of beliefs about witchcraft and official attitudes toward it in Sweden, Hungary, Italy, and elsewhere. His overarching point is that the cultural gestalt that facilitated witchcraft's magic worldview was widespread in Europe, as was the misperception about these beliefs, though the machinery of accusation, trial, and execution was located on the local level, generally in small rural communities. Briggs has painstakingly researched the records of these village trials and enriches his narrative with the poignant personal testimonies of both accusers and accused. ``Unneighborliness,'' Briggs argues, was a principal element in many of these cases: In peasant villages, where families depended heavily on their neighbors as insurance against hard times, any hint of stinginess, envy, or malice suggested that more sinister forces might be at work. But Briggs fails to adequately explain the demise of witchcraft in most European cultures in the 17th century. Given the tremendous amount of local variation in belief and practice, it is significant that witches' trials and executions faded all over the European scene at approximately the same time. The circumstances surrounding the decline of a belief in witchcraft deserve an additional volume from this able researcher and deft writer. (3 maps)