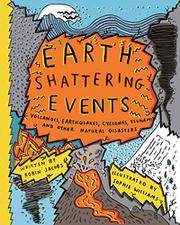 A look at the causes and effects of nine types of natural disasters, from tsunamis to wildfires.

Now and then, Jacobs writes, “the planet reminds us who’s boss.” Loosely grouped as “Geological” and “Meteorological” disasters, the tally of reminders begins with an overview of plate tectonics, then goes on to explain in short segments of narrative, first, how earthquakes are caused (with a side note on the role of fracking) and measured, then what to do if caught in one, common effects, and finally a map with notes on five particularly destructive recent examples. Each succeeding entry is constructed along similar lines. The author asserts in a final chapter that climate change will spur larger and more widespread natural disasters—including even earthquakes and volcanoes—and that we are facing “the biggest environmental challenge we have ever seen.” Williams makes a brave effort to lighten the impact of this worrisome message with brightly colored cartoon views of stylized, impersonal eruptions or wreckage and by interspersing her simple cutaways and diagrams with mildly comical cartoon images of various relevant gods from many traditions or modern (almost all white-presenting) figures cast in the role of observers, commentators, or responders rather than victims. Young readers will nonetheless be left as concerned as they are informed by this catalog of catastrophes.

An eye-opening, and -widening, early introduction to our restless planet.