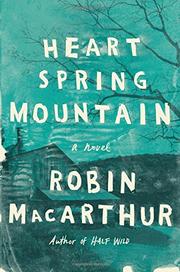 A woman returning to her native Vermont to locate her missing mother uncovers a submerged family history.

The debut novel by MacArthur (Half Wild: Stories, 2016) opens in 2011, as the remnants of Hurricane Irene besiege a rural Vermont town. Bonnie, a heroin addict, has disappeared during the flooding, prompting her daughter, Vale, to leave New Orleans, where she makes ends meet tending bar and stripping, to help find her. With few trails to follow, though, she mainly spends the ensuing months reconnecting with her extended family and locals, particularly her great-aunt Hazel, whose grip on reality is slipping, and her aunt Deb, a one-time commune dweller who still proudly adheres to a back-to-the-land lifestyle. (The novel’s cultural touchstones are feminist and activist icons like Henry David Thoreau, Grace Paley, Frantz Fanon, and Patti Smith.) MacArthur alternates narrators, shifting not just from Vale to Hazel to Deb, but to notebooks written by Vale’s proto-hippie maternal grandmother, Lena, giving the narrative a lyrical, earth-mother vibe. As Vale chats up family, reads the notebooks, and pulls up archives to seek evidence of her Native American heritage, MacArthur’s theme is clear: the various ways women struggle to get past abuse and disrespect. (Vale’s discovery of an infidelity in the past adds another layer of complication.) The family tree can get tangled, a love-interest subplot delivers little heat, and the story is occasionally pockmarked with only-in-a-novel dialogue and actions (“Find me!” Vale cries after flinging her clothes off in a rainstorm). But MacArthur ably sustains multiple narrative threads and voices while sympathetically exploring more than four generations’ worth of hard times. And though the story is somber, there’s enough room in the narrative for a sliver of optimism. As Deb tells Vale, “No radical change comes during good times.”