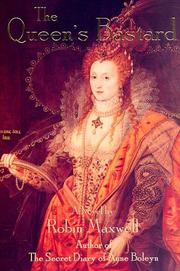 In Maxwell’s first novel, The Secret Diary of Anne Boleyn (1997), Queen Elizabeth discovered her beheaded mother’s diary with its injunction, “Never relinquish control to any man.” The Virgin Queen did not take this advice entirely to heart, according to this sequel tailor-made for moviegoers now delighting in Elizabeth and Shakespeare in Love. The novel’s premise is plausible enough for the genre: As the Spanish Armada prepares to invade England in 1588, the young queen takes as her lover Robin Dudley, Earl of Leicester, and they conceive a son. Born amid fury of storm and flush of lightning, Arthur Dudley lives but is switched at birth with a stillborn child and raised as a country gentleman; Elizabeth thinks him dead. Can she and Robin have another? “No, my love,” the queen tells him. “That was the child with which destiny gifted us and saw fit to withdraw.” “Then I defy destiny!” Robin cries, his voice ringing to the highest heavens of historical fiction as he crushes Elizabeth to him. Their passion for each other is lifelong, but they do not have another child. Meanwhile, Arthur grows to manhood deeply in love with horses; eventually, his romantic dreaminess leads him to Spain, where he’s imprisoned and narrowly escapes death by auto-da-fÇ. Does Elizabeth ever meet her adult son? Can a writer skip an obligatory scene? Thundering dialogue supporting plot upon plot.