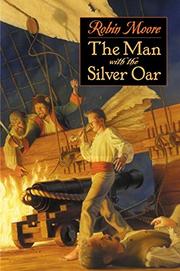 THE MAN WITH THE SILVER OAR

In a patchy pirate yarn rigged with historical people and incidents, Moore (My Life with the Indians, not reviewed, etc.) puts a teenage stowaway aboard an 18th-century pirate chaser. Raised in the strict Philadelphia Quaker household of his Uncle Elias, David steals off to sea while Elias himself is away on a supposed trading venture, and finds himself aboard The Sea Turtle, a refitted merchant ship commissioned to track down brutal, wily buccaneer Jack Scarfield. A trail of burning ships and murdered men leads to a climactic battle, in the course of which David is shocked to learn that Scarfield and Elias are one, a freebooter who assuages his Quaker conscience by buying and freeing slaves to crew his ship, but then steals the money back. Though Moore opens with a melodramatic hanging, he takes a long time to get David off shore, and leaves the complex, potentially fascinating character of Elias/Scarfield, a figure based on a real brigand who led a double life, largely unexamined. Violent encounters are compellingly related, but readers with a taste for salt breezes and nonstop action will find this slow and flavorless next to such blood-and-thunder tales as Iain Lawrence’s Buccaneers (2001) or Gerald Hausman’s Tom Cringle series. (Fiction. 11-13)