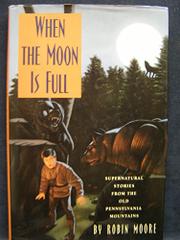 WHEN THE MOON IS FULL

To kids accustomed to gory horror fiction, Moore's (The Bread Sister of Sinking Creek, 1990, etc.) spooky tales from the Pennsylvania mountains—some based on traditional stories, others newly written—may seem tame indeed. More's the pity, for they're beautifully written and quietly chilling, full of shape-changing and weird, primitive archetypes. There's an Indian boy who rescues four girls enslaved by a swamp wizard, a hunter who spends the winter in a bear's cave and becomes a bear himself, and a fiddler whose girlfriend turns into a wolf every night. There are stories about love, too: A grieving mountain lion brings back to life her stuffed mate, who's been nailed to a shed roof; a crusty mountain man drowns trying to save his faithful, moon-crazed hound dog; a young man lost in the wilderness is rescued by an eight-foot-tall hairy woman who will later bear his child. Set in the old days of Indians and pioneers, these episodes portray a world in which you can walk in the woods for days and not meet another human (a thought frightening enough to many urbanites). The stories also tap into the timeless moral truths of an oral tradition—ideas about love, courage, honor, and integrity that are generally hard to teach without sounding hokey. A professional storyteller, Moore knows how to draw his readers gently into this mysterious world, giving them something to dream about without giving them nightmares. (Fiction. 10-14)