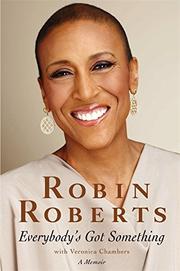 by Robin Roberts with Veronica Chambers

With the assistance of Chambers (co-author; Yes, Chef, 2012, etc.), broadcaster Roberts (From the Heart: Eight Rules to Live By, 2008) chronicles her struggles with myelodysplastic syndrome, a rare condition that affects blood and bone marrow.

The author is a well-known newscaster, formerly on SportsCenter and now one of the anchors of Good Morning America. In 2007, she was diagnosed with breast cancer, which she successfully fought with surgery, chemotherapy and radiation treatment. Five years later, after returning from her news assignment covering the 2012 Academy Awards, she learned that chemotherapy had resulted in her developing MDS, which led to an acute form of leukemia. Without a bone marrow transplant, her projected life expectancy was two years. While Roberts searched for a compatible donor and prepared for the transplant, her aging mother’s health also began to gravely deteriorate. Roberts faced her misfortune with an athlete’s mentality, showing strength against both her disease and the loss of her mother. This is reflected in her narration, which rarely veers toward melodrama or self-pity. Even in the chapters describing the transplantion process and its immediate aftermath, which make for the most intimate parts of the book, Roberts maintains her positivity. However, despite the author’s best efforts to communicate the challenges of her experience and inspire empathy, readers are constantly reminded of her celebrity status and, as a result, are always kept at arm's length. The sections involving Roberts’ family partly counter this problem, since it is in these scenes that she becomes any daughter, any sister, any lover, struggling with a life-threatening disease. “[I]f there’s one thing that spending a year fighting for your life against a rare and insidious…disease will teach you,” she writes, “it’s that time is not to be wasted.”

At-times inspirational memoir about a journalist’s battle with a grave disease she had to face while also dealing with her mother’s passing.