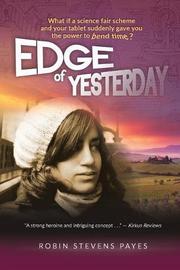 Thirteen-year-old Charlotte Morton, called Charley, loves science, math, and language. She wants to do it all, like her hero Leonardo, “the ultimate Renaissance man.” She goes to Da Vinci Middle School (coincidentally enough) in Takoma Park, Maryland, with her friend Billy Vincenzo, a gearhead who is the school’s “geekiest eighth-grader,” and Beth, a former best friend gone boy-crazy. Visiting an exhibition at the Smithsonian on Leonardo’s Codex, Charley gets a great idea: re-create one of the artist’s sketched inventions for a science fair project. She’s convinced the device is a time machine, and she wants not just to construct it, but to travel back in time, meet Leonardo, interview him, and learn his secrets as well. A series of events and discoveries, including vivid dreams, a golden angle compass, a government computer, Charley’s father’s garage workshop, a captivating young man named Kairos, and a mathematical formula called the Qualia Rosetta—together with “an unforeseen kiss and an awkward misstep”—attempts to transport Charley back in time. Unfortunately, the tale ends rather abruptly. (Bonus chapters from Book 2 are appended.) Payes has an engaging heroine in Charley. She’s confident, hardworking, and curious; though she worries about homework, friends, and boys, she also is consumed with finding answers to serious questions like who we are and why we’re here. Charley’s friends are well-drawn and believable too. Though it goes unexplored, it’s interesting that their world is fairly privileged. Charley’s father, for example, does something secret and science-y in government, and her mother is a concert violinist. Leonardo is, of course, worthy of Charley’s enthusiasm, and there’s enough real science to make the story’s time travel seem more than just a magical transition. But, after all the buildup, it’s a huge disappointment that Charley’s exploits are over so soon, and a lot to ask of readers that they stay tuned indefinitely for the conclusion.

A strong heroine and intriguing concept—but closer to one-third of an adventure than a whole one.