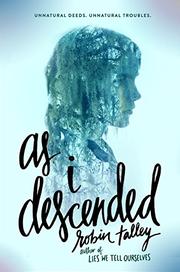 A group of high school students find themselves caught in a familiar spiral of vaulting ambition and direst cruelty in Talley’s 21st-century spin on Shakespeare’s bloody tragedy Macbeth.

Maria Lyon, a Latina senior at the private Acheron Academy on an old Virginia plantation, is second in her class and the school princess—one step down in success and popularity from its white queen bee, Delilah Dufrey. Lily Boiten, Maria’s white, driven girlfriend, who walks with crutches due to a childhood accident, hates that Delilah seems to receive everything Maria rightly deserves—in fact, she hates Delilah, period. The closeted couple desperately wishes to stay together when they graduate and go on to Stanford, a future that can only be assured if Maria wins the prestigious Cawdor Kingsley Award, which means eliminating Delilah. But whether through the influence of maliciously manipulative spirits—the legacy of the school grounds’ dark history as a site of enslavement—or that of the students’ own misguided aspirations, the fulfillment of Maria and Lily’s wish will destroy more than just Delilah, as each previously unthinkable act justifies the next in a frightening and ambition-fueled descent into corruption, betrayal, and death. Talley’s intense reimagining seamlessly weaves the contemporary motivations of a diverse teen cast together with classic guilt and mistrust in a devastating marriage of the stunningly unexpected with the maddeningly inevitable.

This adaptation’s bewitching intrigues and enthralling deceptions will whet the daggers of any reader’s mind.