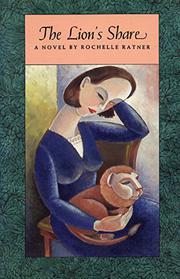 A second novel from poet and American Book Review editor Ratner (Bobby's Girl, 1986), whose heroine's struggle for normalcy and fulfillment, while most admirable, packs as about as much punch as the stuffed animals she collects. Like Leroy, the toy ``Lion'' of the title, Ratner's characters are arbitrarily assigned roles that provide the necessary opportunities for 34-year-old Jana to grow. Jana, an artist, gallery director, and curator of an upcoming important art show in New York, was sexually abused as a child at summer camp. Fearful subsequently of men, she has relied on the comfort of Leroy and his pals, so when Ed, grants officer of the corporation underwriting the show, takes an interest in her, Jana is tempted to flee. And in a way she does—temporarily—by spending the summer at Yaddo, but she can't quite forget nice Ed, with the bald-spot and potbelly. A slow and well-documented courtship, including visits to gynecologists, comes next, and Jana becomes a woman at last. But now there is the pressure of her show—an artist has submitted a potentially controversial piece that might offend the corporate sponsors—as well as the question of her painting. Can she have it all, or must Ed be sacrificed for art? Her old animal pals aren't any help either, it seems, so when the remarkably sensitive, tolerant, and generally wonderful Ed tells her that he understands exactly, Jana realizes ``anything's possible'' and ``change was nothing to be afraid of.'' Jana's fears and difficulties are vividly and sympathetically described, but her relentless self-absorption—along with the thinness of the other characters—minimizes the impact of her coming-of-age. More sketch than portrait.