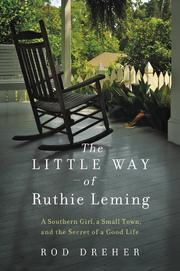 THE LITTLE WAY OF RUTHIE LEMING

A Southern Girl, a Small Town, and the Secret of a Good Life

A Louisiana-born journalist's memoir of how he came to terms with questions of personal belonging that accompanied his "country mouse" sister's tragically premature death.

Dreher (Crunchy Cons: The New Conservative Counterculture and Its Return to Roots, 2006) was a restless dreamer who never quite went along with "the intolerance, the social conformity [and] the cliquishness" that characterized the rural Southern world into which he was born. His pretty and popular sister Ruthie, however, loved their hometown of St. Francisville and knew that everything she ever wanted in life was "in front of her." When Dreher received his first major career break away from home, he took the job. Ruthie, on the other hand, married and became a schoolteacher who took special interest in children from troubled homes. After the birth of Ruthie's first child in 1993, Dreher felt the unexpected tug of home. His hopes of reintegrating into his family and making peace with his father were soon dashed, and he returned to his peripatetic life as a journalist in 1994. Then, in 2010, he discovered that Ruthie was dying of cancer and returned to St. Francisville with his wife and sons. The outpouring of love and support he saw from the townspeople for his sister made him wonder once again if he had made the right choice to leave. But as he re-engaged with the dying Ruthie and her family, he also saw that his ambitions had stirred deep resentment in the people he loved most. Moved by his sister's courageous battle and the stories of how Ruthie's everyday acts of love had changed the lives of others, Dreher began the difficult process of humbly accepting "the limitations of place" to finally know "the joys that [could] also be found there."