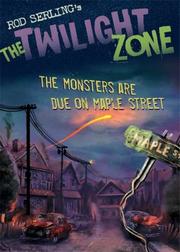 THE MONSTERS ARE DUE ON MAPLE STREET

As dusk falls on suburban Maple Street, children frolic while adults finish their last bits of work outdoors. After a sudden flash, the electricity goes down, then the phone lines, then the automobiles. When some homes mysteriously recover power, panic and fear start to set in—then a young boy declares the flash extraterrestrial, and that aliens have sent human decoys to lead their invasion. Propelled by this statement, Maple Street becomes an all-out violent, paranoia-driven mob scene. Ellis’s evenly boxy panel sizing brilliantly breaks way into a chaotic full-page spread when the crowd reaches its fever pitch. This adaptation is a deliciously creepy reworking of the TV classic and offers a timeless slant on this tale. Equally engaging is The Odyssey of Flight 33 (ISBN: 978-0-8027-9718-6; paper: 978-0-8027-9719-3), illustrated by Robert Grabe, also out this month, with the same wonderful building of suspense that then dissolves into sheer weirdness. Though each story is illustrated by a different artist, they employ a similar style, which provides cohesion within the series. Eerily appealing. (Graphic fiction. 12 & up)