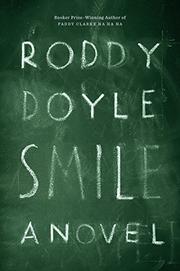 A return to form for the Dublin novelist, who illuminates the troubled psyche of a writer who can’t quite bring himself to write.

After hitting his peak renown a couple of decades ago (Paddy Clarke Ha Ha Ha won the Booker Prize in 1993), Doyle has sometimes seemed to be drifting on autopilot. Not here, where the first-person narrative is fresh and bracing from Page 1. Victor has come to a pub looking for a place to become a regular after his recent split from his wife, a TV celebrity with a weekly show. In the pub, he encounters a man who says he remembers him from school and seems to know more about him than anyone besides Victor himself should. As Victor returns to his single-man’s flat, and to the writing that haunts him because he can never accomplish much, he muses on the life that has brought him here. He remembers the Christian Brothers, his teachers, one of whom molested him at least once. He remembers his days as a rock critic and then his move into political journalism, which resulted in his chance meeting with the beautiful, irresistible Rachel. She would become Ireland’s television sweetheart, beloved by all, but for some reason she loved only Victor. The reader can’t figure out why. Victor can’t figure out why. The friends he makes in the pub can’t figure out why. “What did she see in you?” one asks. Their split is also something of a mystery. Meanwhile, Victor keeps running into that same guy in the pub, the stranger who has now become his best friend. “He’d know—he knew—more than I’d want known,” Victor fears, more than he’d want to tell the others in the pub or even the reader. The writing that obsesses him is “about the rot that is at the heart of Ireland,” that is within Victor himself, a corrosion that began in his school days. It isn’t until the final pages that the reader understands just what Doyle has done, and it might take a rereading to appreciate just how well he has done it.

The understatement of the narrative makes the climax all the more devastating.