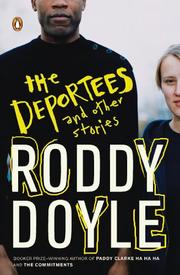 One of Ireland’s most popular and prolific contemporary writers, Doyle (Paula Spencer, 2007, etc.) offers eight stories focused on a single phenomenon—the proliferation of immigrants to his native land and the transformation of what it means to be Irish. Doyle writes in the foreword that in the 1990s he “went to bed in one country and woke up in a different one,” a country inhabited by newcomers from Poland, Nigeria and other places who serve as the protagonists for these stories. He has continued to write short fiction for the weekly Metro Eirann, which bills itself as Ireland’s multicultural newspaper, and where each of these stories first appeared in monthly 800-word installments. While Doyle’s employment of dialogue and vernacular are characteristically colorful, the short fiction lacks the depth of his novels, with some of the characters seeming more like types than fully fleshed. The longest is the title story, a sequel of sorts to Doyle’s The Commitments, with manager Jimmy Rabbitte returning to assemble a United Nations lineup to perform the songs of Woody Guthrie and others. Why? No clue. Another story, “Home to Harlem,” concerns a student of literature who comes to America to research his questionable conjecture that the Harlem Renaissance had a profound influence on 20th-century Irish literature. Why does he think so? He can’t really say, as the story mainly serves to show his confusion over a form that has an African-American category for race/ethnicity but none for African-Irish. As Doyle says of his stories, “Almost all of them have one thing in common. Someone born in Ireland meets someone who has come to live here…. Today, one in every ten people living in Ireland wasn’t born here.”

Point taken, but what might have been entertaining as a newsprint monthly series seems slight in book form.