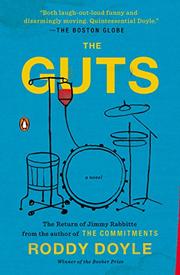 In this entertainingly chatty novel, the Irish author revisits some characters from the well-received debut that launched his career, but he isn’t quite sure what to do with them.

The publication of The Commitments (1987) established Doyle as a master of the Irish vernacular, earning its place on the short shelf of great rock novels and inspiring a movie that reached an even wider audience. The prolific author has since written some novels that are even better than the first, though his recent output has been more erratic. This represents a return to form, not quite a sequel to that debut and not quite as good but a novel that shows how the musical generation he chronicled earlier is now dealing with mortality, family, nostalgia and all sorts of issues of getting older but not necessarily smarter (or, in some cases, happier). Protagonist Jimmy Rabbitte, who formed and managed the Commitments, is still a musical hustler, but now his racket is reuniting and reissuing music from bands of that earlier era, many of whom he holds in great contempt. It seems that even in the midst of an economic downturn, “[t]he middle aged are still finding the money to fund their nostalgia.” There’s a hilarious middle-aged, punk-rock duo—a married couple who break up (the band at least) during every session—and there’s another very funny episode about Jimmy’s response to one of his more popular musicians and the affair that musician seems to be conducting with a young staffer—which requires a series of apologies when Jimmy discovers that he has misjudged the relationship entirely. Much of the book is very funny, audaciously so, considering that Jimmy is suffering from bowel cancer, undergoing chemo (while reading Chemotherapy & Radiation for Dummies), cheating on his saintly wife and watching while the country’s entire economy goes down the toilet. Yet, it is full of loose ends—a reconciliation with his brother, the attempt to fake a recording from 1932—that the author never ties together, perhaps since Jimmy’s is not the sort of tidy life.

Whatever its novelistic flaws, the rock criticism and pop-culture insights are sharp throughout.