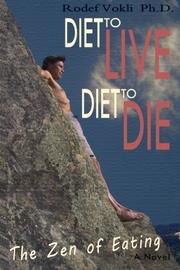 DIET TO LIVE - DIET TO DIE

The Zen of Eating

In Vokli’s debut novel, a Silicon Valley professional longs for a quick way to build a lean, muscular body but instead receives lessons in how to live.

The story follows Rodef, a somewhat overweight man in his early 40s. Rodef has it all—a loving partner, a big house in a nice California neighborhood and a well-paying job—yet he shuffles through life with robotic dreariness and lower back pain. Rodef and his colleagues have lunchtime conversations about dieting and how they are unable to lose weight. Later, he meets a mysterious man named Zakhariy at an ice-cream parlor. At 75, Zakh has the perfectly sculpted body of a much younger man, but he doesn’t explain how he achieved this miracle; instead, he frustrates and intrigues Rodef with questions. The two continue to meet for hikes in area beaches and parks, where Zakh bounds down rocky trails with ease; clumsy Rodef, meanwhile, is determined to learn the secret to Zakh’s youthful appearance. The bulk of the book consists of the often philosophical—and sometimes textbook-slow—dialogue between the two men about health, eating and living life to the fullest. Lean on plot, the narrative reads like nonfiction at times; the author also provides several sketches, including pictures of Zakh’s stretching exercises and diagrams of female erogenous zones. The childlike Rodef begins to understand the difference between knowing and understanding, as Zakh prompts him with thoughts such as: “If you live as though you’ll die the next moment, then you’ll die at the right time. It is death that makes us alive.” There are some memorable character moments, as when Rodef takes Zakh’s advice to eat naked in front of a mirror. As Rodef begins to embrace life, he also begins to appreciate the natural world, even going so far as to perch on a cliff’s ledge to become one with the rock. The book’s greatest strength is its loud-and-clear overall message: Optimal health and mental peace can’t be acquired via dieting.

An occasionally awkward portrayal of one man’s philosophical quest to break the shackles of his negative habits.