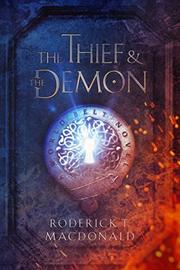 THE THIEF AND THE DEMON

This epic-fantasy debut sees a thief unwittingly unleash a demon that feeds on wizards.

There are thousands of kingdoms in the World Belt. Fistmar, a lieutenant in the Thieves Guild, hails from the opulent city of Aranvail. After copying the secret logbook of his boss, Gloster, Fistmar heads to Schtalegaard. There, he robs the foolish Prince Caolan, who’s passed out after a night of drink and gambling. Fistmar later finds himself imprisoned for the prince’s murder, although he claims he’s not a killer; still, Mikhael Schtalfir, Duke Schtalegaard’s castellan, plans to torture the thief to death. Luckily, Fistmar possesses a false, magical tooth—a gift from the wizard Maevendin—that helps him pick the lock and escape his dungeon cell. Yet as he’s running through the labyrinthine prison beneath the Duke’s castle, the tooth seems to guide him. He finds a chamber of blue stone, and within it is a door that the wizard Faeramivor, who worked alongside Mikhael, warns him not to open. But open it he does, releasing a demon that explosively drains Faeramivor’s essence. Fistmar uses the ensuing chaos to head for Aranvail, seeking to clear his name of the Prince’s murder. However, a trio of warrior spirits tell him, “You freed the demon, and in doing so, you were bound to it.” In this striking debut, author Macdonald breaks from the epic-fantasy herd with electric prose and a true sense of the cinematic. Major characters receive memorable introductions, including Miranna, the famous, beautiful gambler whom Fistmar loves; and Norvik, who reluctantly helps him escape Aranvail’s treachery. The demon is fabulously described: “Teeth swam beneath its skin, to sometimes tear through in rictus grins, or to fly forward on tentacle limbs.” Macdonald also has great fun with magic, employing portals controlled by warlocks called the Scarlet Brotherhood, and Soulstones that can transfer spirits to fresh bodies. The worldbuilding and plot never compete with each other, resulting in an excellent series foundation.

An adventure of eye-opening cleverness.