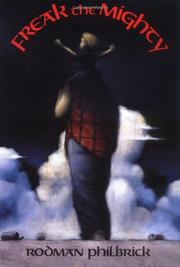 ``The unvanquished truth'' concerning the extraordinary friendship between Kevin (``Freak''), a brilliant 12-year-old whose birth defect prevents growth, and gigantic Max, who recognizes in his new two-foot-tall neighbor the feisty kid with crutches he knew in daycare years ago. Meanwhile, Max has his own troubles; he can barely read, making school an ordeal, and since his dad's in jail for killing his mother, he lives with gentle Gram and the aptly named Grim in a fairly rough neighborhood. As ``Freak the Mighty''—as they call themselves when Freak perches on Max's shoulders, guiding him like a horse and issuing instructions—the two have much to give each other. With Freak's quick wits and Max's long legs, they explore the neighborhood and best a gang of bullies on July 4. Freak, with his vast vocabulary and imagination to match, is uncondescending but uncompromising. He gets Max involved in his elaborate fantasy games and lures him into reading; when school starts, Max (somewhat implausibly) is placed in the gifted class to help his friend. When Max's father gets out on parole at Christmas, a mesmerizingly suspenseful sequence echoing the earlier rout of the bullies ensues. Max's description of their friendship—ostensibly written, after Freak's death, in the blank book Freak had given him—is gritty, unsentimental, sparked with Freak's wry verbal wit and Max's earthier humor, and ultimately poignant. Easily read but compelling: an intriguing and unusual story. (Fiction. 10-14)