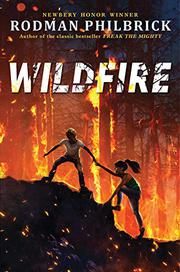 A boy, a girl, a venerable Jeep, and a massive wildfire sweeping across the mountains of Maine. It’s the perfect setup for a riveting tale of high suspense.

Sam and Delphy are staying at separate summer camps on the same lake when the threat of a wildfire forces evacuation—but both are inadvertently left behind. Using the survival skills he learned from his deceased father, Sam hikes cross-country until he finds a remote cabin and the old Jeep that will prove to be his salvation. Only later, barreling along a narrow logging road, does he encounter Delphy. With shades of My Side of the Mountain for a modern audience, 2010 Newbery Honoree Philbrick (The Mostly True Adventures of Homer P. Figg) provides the pair of young adolescents, both white, with just enough modern technology to keep the tale credible. It will take all of their courage and wits to survive being lost in the wilderness, even as they are constantly threatened both by the erratic fire and the danger posed by two out-of-control arsonists. Sam’s pithy first-person voice is self-deprecating enough to be fully believable and plays nicely against Delphy’s sometimes less confident but heroically determined character. Short chapters, outstanding cover art, and a breathless pace make this a fine choice for reluctant readers. Interesting backmatter regarding wildfires and survival tips rounds out a thrilling tale.