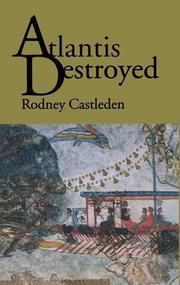 Castleden (The Making of Stonehenge, not reviewed), working with Plato’s Critias, historical and contemporary scholarly works, and his own speculation, seeks to identify the fabled island of Atlantis and set it within a greater political-literary context. As Castleden explains, the story of Atlantis dates from before Plato, back to the priests of Sais in Egypt and then into the mists. But it is a close reading of Plato’s rendering on which Castleden bases his conclusions. Yes, Plato uses the island as a parable, as political satire to improve his fellow Athenians and tempt Syracusans with an ideal for the city-state, but there are so many identifiable elements in the story—geographically, geologically, in references to commerce—that if these elements are put into historical perspective, if certain misreadings of ancient Minoan texts are accounted for, a stab can be taken at the island’s identity. Castleden understands the pillars of Heracles to be situated at the Gulf of Laconia, and not the western end of the Mediterranean, and Atlantis to be an archipelago of Aegean islands, Crete and Thera (a.k.a. Santorini) most prominent among them. Plato, Castleden argues, conflated the two islands for his own allegorical convenience, and thus the confusion. The islands— particular geographical features bear out his description. Castleden buttresses his theory with a detailed examination of Cretan and Theran histories and cultures, drawing parallels to Plato. The theory is certainly plausible: His familiarity with the material is intelligently nuanced, and when he takes a leap in the dark’suggesting understandable mistranslations by the Egyptians, say—it is never far-fetched. Castleden’s pseudoscholarly tone—the book often reads like a script for Robert Stack’s Unsolved Mysteries—can be a put-off, but the material is too fascinating for that to be much of an impediment, and the subject has survived far worse treatment. (For another view of Atlantis, see Richard Ellis, Imagining Atlantis, p. 630.) A fine synthesis of Atlantis-related research, with a good number of intelligent, provoking speculations and an insightful consideration of Plato’s myth-making talents. (b&w photos, line drawings, not seen)