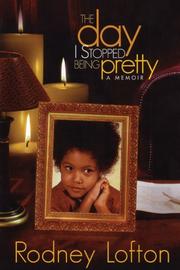 THE DAY I STOPPED BEING PRETTY

A gritty look at what it’s like to be young, black, gay, alienated and diseased.

Light-skinned with cascading curls, African-American Lofton had been described as “pretty” for as long as he could recall. It wasn’t easy being a pretty boy, and once he realized he was gay, he found it even harder to feel comfortable in mainstream society. His skin color and homosexuality complicated every aspect of his life. After being sexually hyperactive as a young man, Lofton was diagnosed with HIV in 1993. That prompted him to launch a nonstop hunt for the treasures of love, health and acceptance. A freelance writer, former P.R. flack and gay activist, Lofton pulls no punches in his debut. In one instance he describes his father as a “cock hound,” in another he characterizes his stepmother as “a female version of Verdine White of Earth Wind & Fire” (anyone who’s seen Verdine knows that’s a harsh dig). He has no problem relating his sexual history in explicit detail, from how he learned to masturbate to near-pornographic accounts of trysts with lovers. This honesty is at once impressive and painful, most notably when he unflinchingly discusses his suicide attempt and a sexual assault at the hands of a stranger he had invited into his house. Stories like his don’t necessarily end neatly, and neither does the book, but Lofton’s work within the gay community and to raise AIDS awareness speaks for itself. Similar in content to Shawn Decker’s outstanding My Pet Virus: The True Story of a Rebel Without a Cure (2006), Lofton’s memoir isn’t quite as engaging a read, but it’s fiercely compelling in its own way.

Dark and difficult, but sometimes life is like that, and sometimes we need to be reminded.