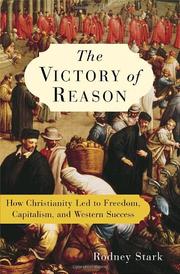 THE VICTORY OF REASON

How Christianity Led to Freedom, Capitalism, and Western Success

A panoramic study of Western history, designed to draw a connection between Christianity and the rise of democracy and capitalism.

Stark (Social Sciences/Baylor Univ.) takes the reader on a selective tour of Western history. The title concept of reason is certainly brought up throughout, but it is overshadowed by the roles of Christianity and personal freedom. Stark begins with a question: What caused the West to take such a dominant role in world history? His answer is complex, and he opens by examining the role of Christianity, which facilitated a particularly forward-thinking and progressive worldview. It encouraged adherents to utilize reason in examining scripture and matters of theology. The Church’s positive view of human progress, coupled with reason, led to unparalleled advances in technology and science. Stark then moves on to the rise of capitalism, which he contends began within early monastic communities and came to fruition in Northern Italian city-states by about the 12th century. From Italy, capitalism spread to Northern Europe. Echoing modern libertarian authors, Stark points out that economic success was consistently born out of freer societies; command economies over the past two millennia may have often wielded power, but they did so at the expense of their people's well-being and of technological progress. These trends then spilled over into the New World. In making his arguments, Stark utilizes plenty of solid research. However, he also expands great effort on matters that get in the way of his point, such as devoting an entire chapter to convincing the reader that the “Dark Ages” were anything but dark.

An intriguing, if at times over-reaching work.