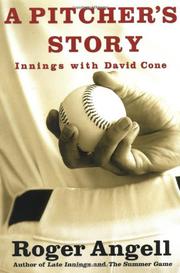 A look at the life, last Yankee season, and psyche of an elder statesman of the pitching rubber.

Ever since Cone joined the New York Mets in 1987, he has been one of the most interesting, frustrating, and formidable pitchers in either league. He helped the Mets rumble to a divisional title in 1988, only to collapse against the Dodgers in the league championship series. Tarred with a reputation for hard living and dangerous high jinks, Cone was traded away from the Mets in 1992—and landed with the Yankees in 1995. His dramatic Bronx career included a wrenching loss to the Mariners in the first round of the playoffs, seven no-hit innings and a World Series–saving win against the Braves in 1996, and a perfect game against the Montreal Expos in 1999. New Yorker baseball writer Angell chronicles Cone’s career in the context of his gut-wrenching, heartbreaking 2000 season, his last with the Yankees. Interspersed with the story of his increasing frustration over what would become a 4–14 record and the Yankees’ own lackadaisical slide into the playoffs are chapters on his Kansas City childhood and his domineering father Ed, his early career in the Kansas City Royals’ farm system, his bittersweet Mets years, his return to New York as a Yankee, his work as a players’ union representative, and his decision this year to go to spring training with the Boston Red Sox. Throughout, Angell provides insight into the psychology of pitchers and the mechanics of the slider, the wild escapades of young ballplayers on their own for the first time, the ambivalent feelings of the rich sons of working-class fathers, and the void left by the loss (at an age when most people are only hitting their stride) of the skills of a champion—and, finally, of the game itself.

Written with Angell’s usual economy and intelligence, and with a tact that matches its subject’s reticence, this look at an unusual baseball life will appeal to all students of the game—even those who have little use for the Yankees.