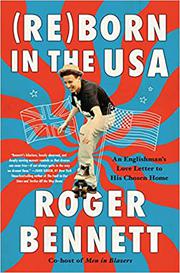 An Englishman's Love Letter to His Chosen Home

A fan’s notes on the beckoning city on the hill, the America of old.

"America existed almost as an alternate planet to me, a place filled with possibility and promise, where life seemed to be lived with a different gravitational pull.” So writes Liverpudlian Bennett, the descendant of a Russian Jew who left home to go to America and mistakenly got off in the U.K. instead—all reason enough for the author to have considered himself, from his earliest years, as “an American trapped in an Englishman’s body.” If his parents and schoolmates were sometimes bemused by his attachment to such emblems of American popular culture as Saturday Night Live, he found encouragement in the teacher he fondly calls “Fat Knacker,” who told tales of an America that welcomed newcomers and promised grand adventures. Most of Bennett’s entertaining memoir takes place in the U.K., though at the end, he finally arrives in the U.S., first in Chicago and then in New York. “For me, the United States has proven to be a land so free, you even allow bald blokes with accents to appear on television,” he writes appreciatively, having logged many hours as the co-host of Men in Blazers, a popular soccer-focused sports show. Bennett is good-natured, self-deprecating, and wryly observant throughout, recounting a disastrous bar mitzvah, feckless romances, teenage infatuations, and suchlike things. He takes a serious turn, though, when he writes about when he finally became an American, a time when the nation was presided over by a racist xenophobe. “The fact I had become a citizen at the very time the United States became so turbulent and chaotic was crushing,” he writes, noting that like so many other immigrants, he had come to the country on a tourist visa and simply stayed on, never having had to cultivate the fear of authorities that so many other would-be Americans have to endure.

A three-cheers homage to an America that, Bennett suggests, is returning to its open-arms promise of days past.