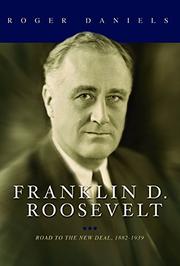 A vigorous, thorough examination of the New Deal programs, pinpointing Franklin Roosevelt’s successes and failures and much improvisation.

A retired scholar with specializations in immigration and ethnicity, Daniels (Emeritus, History/Univ. of Cincinnati; Guarding the Golden Door: American Immigration Policy and Immigrants Since 1882, 2004, etc.), like many other historians, revered Roosevelt and intended always to write a biography. However, writing frankly that his subject’s “inner essence” was inscrutable, Daniels concentrates on the “public discourses” the voluble governor and president made as he began to fashion the New Deal agenda. In a dense but consistently informative narrative, the author incorporates a great deal of FDR’s “direct discourse.” Moving chronologically, though swiftly through his childhood, early career in the New York Legislature (where he first encountered the enormous talent of reporter Louis Howe), and years as assistant secretary of the Navy, Daniels devotes his astute observations to FDR’s thrust into politics. He skirted aside a reputation as “a playboy and idler” and dug into the issues he would have to deal with as president (e.g., “mass poverty and its relief”), and he honed his effective communication and management styles. Although Herbert Hoover had been delivering the same kind of confidence-bolstering speeches as FDR when the latter won election in 1932, Roosevelt had by then “transformed the mood of a nation.” Daniels emphasizes that there was no blueprint for the New Deal; FDR, who believed in balanced budgets and never called himself Keynesian, was flying by the seat of his pants in 1933. His first priority was to “stop the bleeding” in the financial sector, support farm policy, and get people back to work via wildly popular programs geared more to the middle class than the “forgotten man.” While some programs succeeded, the severe 1937 economic downturn probably resulted from his stopping the spending too early.