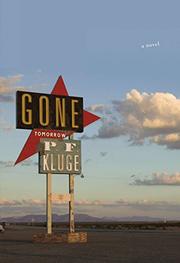 Perhaps drawing upon his experience as a writer in residence at Kenyon College in Ohio, Kluge (Final Exam, 2005, etc.) offers a fictional, expansive and discursive take on a teacher’s writing life at a small, unnamed college in Ohio. As he nears the end of a 35-year career as a creative-writing teacher, George Canaris is killed in a hit-and-run one spring morning as he takes his daily constitutional. In its laudatory obituary, the New York Times hails two novels Canaris wrote early in his career, but concludes the reasons behind the fallow literary career that followed remain a mystery. For decades Canaris had promised a novel that never materialized. The work—with the not-too-subtle title The Beast—became his albatross and ultimately led the college to encourage Canaris to step aside to make room for the latest hot, young author. Going through the teacher’s home, his literary executor finds a manuscript in the refrigerator. The work, alas, is not The Beast, but a memoir entitled Gone Tomorrow. The journal follows two tracks, an account of his final days as a teacher and a chronological journal of his life. Kluge’s vision is panoramic. He moves from Prague, where Canaris was born, to California, where he wrote a novel about Hollywood; then to Ohio; briefly to Manhattan; then, near the end, back to Prague, where the idea for The Beast first took hold. A full slate of sharply sketched characters fill out the canvas—a film star with whom Canaris has an affair; colleagues and administrators collegial and nasty; and writing students frustrating and rewarding. Through all this The Beast hovers, in the same way that “Rosebud” haunts Charles Foster Kane. If the novel even exists, what does it tell about its author?

Kluge’s sharp writing and vivid descriptions elevate what could have been yet another novel about a frustrated writer’s second act.

A CALL FROM JERSEY
by P.F. Kluge
Fiction