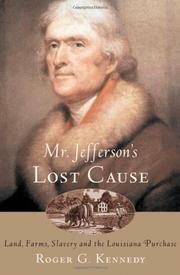 A sweeping, continent-wide reinterpretation of early US history from Kennedy (Burr, Hamilton, and Jefferson, 1999, etc.), who replaces individualist heroes such as Daniel Boone with economic movements, transcontinental forces, and unintended consequences.

For example, writes the former director of the Smithsonian’s National Museum of American History, Thomas Jefferson envisioned a nation of yeomen, landholding farmers. What he got—what he allowed, in fact—was a corporatist country of plantation owners beholden to the hated England. When Napoleon arranged for Jefferson’s purchase of the vast Louisiana territory in 1803—a sale he was not legally authorized to make, nor Jefferson to accept—his aim was to assure American dominion over the interior of North America, thus thwarting English efforts to keep a flanking presence on the Mississippi River. What happened, though, was that Jefferson, for puzzling reasons that do not reflect well on him, allowed fellow members of the slaveholding planter class that dominated early American politics to dictate the terms of settlement in the new lands of the Louisiana Purchase, thereby rendering his vision of a land settled by smallholders and eventually absent of slavery all but impossible—and, in the bargain, sowing the seeds of civil war. Kennedy offers a portrait that replaces nation-states with contending corporate forces: “There were more non-Americans fighting for American independence at Yorktown,” he writes, “than native-born, and only a minority of the opposing troops under the command of Cornwallis were born in England,” while the Spanish and even Indian nations were congeries of many ethnicities bonded by ever shifting alliances. Thematically rich and full of subtle arguments, Kennedy’s study forces a reconsideration of accepted views. It couldn’t come at a better time, given the soon-to-be widely commemorated bicentenary of the Lewis and Clark expedition.