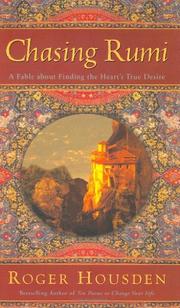 A Fable About Finding the Heart’s True Desire

New Age fable by first-novelist Housden (Sacred America, 1999, etc.) about the peregrinations of a young Greek icon painter who wanders from Florence to Istanbul in search of enlightenment.

To Greek Orthodox believers, icons are far more than works of religious art: they are holy objects in themselves, as worthy of veneration as the relics of a saint or the words of Holy Scripture. Those who create such works are invariably deeply religious, although they aren’t necessarily monks or nuns. The Greco-Italian icon painter Georgiou was born into the trade, so to speak: His father Stefanou had been an icon painter, and he had trained Georgiou in the craft. As a young man growing up in Florence in the 1950s, Georgiou was surrounded by magnificent art—Fra Angelico being his favorite—but he was a restless soul, always eager to travel and discover new worlds. His friend Andros, although nearly as old as Georgiou’s father, understands his wanderlust and provides Georgiou with letters of introduction to a monk of the Greek monastery at Mount Athos and to a Sufi dervish in Turkey. With his father’s blessing, Georgiou sets out to meet these men, who he hopes can offer him the spiritual enlightenment he craves. On Mount Athos, the monastic republic where no woman has set foot in more than a thousand years, Georgiou immerses himself in the study of the Virgin Mother, who he learns is a descendent of the ancient pagan earth goddesses. In Turkey, he is schooled in Sufi mysticism by a dervish and undergoes a series of mystical episodes that confirm him in his vocation as a painter. At last he returns to Florence, falls in love, marries, and lives happily ever after.

An amusing but shallow diversion whose Gurdjieff-like dialogue (“Can you describe this love you are seeking?”) can be either annoying or hilarious depending on your frame of mind—as can the entire story.