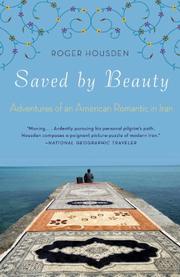 Adventures of an American Romantic in Iran

The eloquent account of a Western poet’s encounters with the land, culture and people of Iran.

When Housden (Ten Poems to Change Your Life, 2007, etc.) was a young man living in London in the early 1970s, he fell profoundly and permanently in love with Iranian literature, music, art and architecture. His vision of and attachment to Iran were highly idealized, however, based on second-hand cultural experiences that were “never tested by reality.” In 2007, as he was casting about for his next writing project, he had a flash of intuition. He would undertake an exploration of “the other Iran,” the country behind the politics and sensationalist headlines. The guides along this journey would include Rumi, the Persian mystic poet he had held close to his heart since youth; outspoken artists, thinkers, politicians and spiritual leaders; and everyday men and women. In his travels across Iran, Housden discovered a vibrant country made all the livelier by its abundant internal contradictions. Though austere on the surface with its apparent adherence to the fundamentalist tenets of Islam, Iran was a place where anything—from alcohol, Western films, drugs and sex—could be “delivered like a pizza” and where nose jobs and “Elvis haircuts” were the most popular and pervasive forms of social rebellion. At the same time, it was also a place steeped in tradition and a magnificent history that had deeply impacted the cultural and religious development of the West. But most movingly of all for Housden, a self-proclaimed romantic, Iran was where “Beauty [was] one of the names for God.”