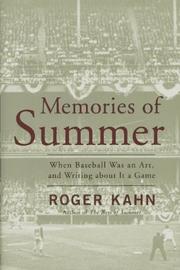 When Baseball Was an Art and Writing About It a Game

Kahn, dean of American sportswriters, shares his memories of a time when baseball players and writers were not the servants of different corporate masters and the game itself was not a virtual hostage to corporate or political interests. Growing up in Brooklyn during the Depression, Kahn acquired his love for the game, and for the Brooklyn Dodgers, from his father, Gordon. Ever the runners-up, the Dodgers were nevertheless a part of the warp and woof of Brooklyn life. Beginning as a copyboy at the now defunct New York Herald Tribune, Kahn eventually caught on with that paper's fabled sports section—home to Red Smith's column—and landed a sports beat in time for the 1952 season. At that time the press seldom violated players' and managers' privacy, primarily because it would have seemed wrong to do so. (However, Giants manager Leo Durocher resorted in some cases to bribery to keep overzealous reporters ``honest.'') Kahn was a gifted witness to a golden period, and he captures here what the game was really like in the 1950s and '60s, recounting both the good times and bad. He reveals how alcohol and easy camaraderie made responsible reporting difficult but fun; how racism kept many worthy players off the field and many worthy columns off the sports pages; and he gives readers a fly-on-the-wall view of the birth and infancy of Sports Illustrated. His vivid tales of some of the remarkable but less familiar players remind us that, in baseball as in life, numbers seldom tell the whole story. As ever, Kahn is earthy, forceful, graceful, and seldom sentimental. Rather than take potshots at today's much altered game and players, he reminds us clearly of what baseball used to be, and allows us to come to our own conclusions. Simply put, this is a marvelous book. (photos) (Author tour)